Love science and writing? The UNSW Bragg Student Prize for Science Writing 2022 opens for entries next month. Here, we introduce you to this year’s judges

Proud Kamilaroi man Corey Tutt is the CEO and founder of DeadlyScience, which gathers donations of science resources and sends them to remote schools around Australia. Corey is engaged with over 100 schools around Australia. In a recent survey, these schools showed a 25% increase in engagement in STEM-related subjects. In some schools, attendance has increased by 40%.

Corey has been honoured by receiving many prestigious awards including the NSW State Recipient of the Young Australian of the Year in 2020.

He devotes his time to making tomorrow a better day, and telling kids and people about the First Scientists our Aboriginal and Torres Strait Islander people. When Corey isn’t doing DeadlyScience, he plays rugby and finds reptiles. He also started sponsoring a rugby team in Fiji in 2018 by providing young men with boots and jerseys.

Fred is best known today for his award-winning radio and TV broadcasts, books, music, dark-sky advocacy and co-hosting the popular Space Nuts podcast, which averages a million downloads per year.

Fred has an asteroid named after him (5691 Fredwatson), but says that if it hits the Earth, it won’t be his fault. His latest book is Spacewarp – Colliding Comets and Other Cosmic Catastrophes, aimed at the 10+ age group and published by NewSouth Press.

Ivy Shih is a science writer based in Sydney and loves museums, archives and finding science stories from the little things in life.

A former virus researcher, she now writes about all areas of science, from coconut cracking megabats to giant viruses. She is also an audio producer on the ABC astronomy podcast Cosmic Vertigo.

Heather Catchpole is a business owner and communications expert with wide experience in collaboration, startups, science and technology sectors. She is the CEO of Refraction Media, a STEM specialist content company that has worked with the Australian Academy of Science, Chief Scientists Office, Cooperative Research Centres, Australian Council of Deans of Science, Google, Atlassian, CSIRO and many more.

A journalist, presenter and producer, Heather has experience working with media, universities, government, educators and large finance, science and technology corporations. She is the founder of the Careers with STEM brand, promoted by Barack Obama’s 2016 CS for all initiative and responsible for distributing 2 million free STEM careers magazines to high school students in the US, Australia and New Zealand.

Heather’s wide-ranging background includes creating a virtual tour of a nuclear reactor and reporting for ABC radio from fossil digs and live volcanoes. She is the author of a number of children’s books, including most recently Ready, Set, Code!

Brad Thomas holds a Bachelor of Science degree with a diploma in Education (Bsc Dip Ed). His specialist areas are Biology and Earth and Environmental Science. He has 25 years of teaching experience and is nationally accredited as a Highly Accomplished Teacher with NSW Education Standards Authority (ATA NESA). His current school is Macarthur Girls High School in Parramatta, Sydney.

He is passionate, committed, enthusiastic, dedicated, and determined to strive, to succeed, and to teach to the highest standards to all students in his care. His goal is always to inspire, engage and share his love of Science as a rewarding lifelong and meaningful learning experience.

Keen to submit an essay?

We’ll keep you posted on the launch of the UNSW Bragg Student Prize for Science Writing next month and will be sharing loads of essay-writing tips and tricks. In the meantime keep in the loop by signing up to our eNewsletter and check out last year’s UNSW Bragg Prize winner here.

The Bragg Prize is an annual award celebrating the best non-fiction science essay written for a general audience. An initiative of UNSW Press, UNSW Science and Refraction Media, the UNSW Bragg Student Prize for Science Writing is designed to encourage and celebrate the next generation of science writers, researchers and leaders. For an aspiring university Dean of Science or Walkley Award-winning journalist, this could be the first entry on their CV.

The Bragg Prizes are named for Australia’s very first Nobel Laureates, the father-and-son team of William Henry Bragg and William Lawrence Bragg. 2015 marked the centenary of their Nobel Prize win in Physics for their work on the X-ray analysis of crystal structures. William Henry Bragg was a firm believer in making science popular among young people. His lectures for students were described as models of clarity and intellectual excitement. More information about the Bragg prizes can be found here. 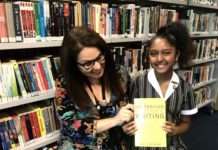 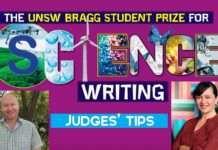 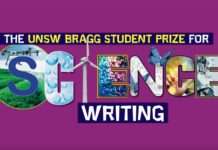 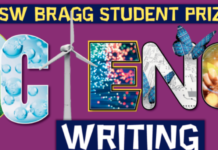 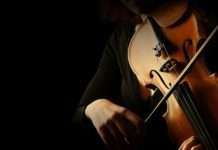 How does the violin saw its tooth? 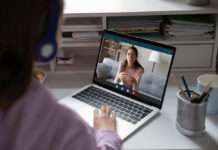 UNSW Bragg Prize 2021 Winner: The Dark Side of Blue Light