Wanna get paid to reach for the stars? Get inspired by these awesome and diverse space careers

With so many important STEM jobs in space-related fields, we’re using Global Astronomy Month (April) to promote next-gen gigs not just in protecting the Earth – but also in making it a better place!

So, what space jobs are going?

Sure being an astronaut would be awesome and all, but there are so many next-gen space roles that draw on STEM skills – like software development, industrial design, programming and metal fabrication – that don’t involve leaving Earth.

Space companies are crying out for grads with advanced science, tech, engineering and maths smarts, with The Australian Space Agency aiming to triple the size of our space sector and create 20,000 local jobs in the next 10 years.

Wanna know some of the out-of-the-box career pathways you could kickstart? In space, not even the sky’s the limit – and these future-focused space industry professionals are proof.

Jordan Plotnek co-founded Anchoram Consulting after starting a PhD in space security. He realised there was a big gap in understanding how to design space systems that can withstand attacks.

“A new challenge in security is keeping satellites up no matter what,” Jordan says.

Jordan says it’s an exciting time to get involved in space. And security skills are a great way to do it. “If you go into security and then space, the good news is it’s very broad.” Jordan has worked with engineers, data scientists, psychologists and geologists. “These days, it’s not just about cyber security, but also physical security and fraud as well as people,” he says.

And with plans to launch an Australian-made lunar rover, things are only going to get better. “Today’s high school students will do the cool stuff. We’re just preparing the way,” Jordan says.

Dr David Flannery’s STEM career rocks, literally. An Adjunct Professor at QUT in Brisbane – he is also a key member of NASA’s science team working on the Mars 2020 Perseverance Rover mission. The rover is more than halfway along its seven-month, 480-million-km journey to Mars and is due to land in February 2021.

David is using his geology, palaeobiology and astrobiology expertise to decide which Red Planet rocks the rover will collect and analyse. He is also mapping out the path that the rover will take across the Martian surface to get to those rocks. The rover needs to get the most useful scientific knowledge it can during its time on Mars, so choosing the right rocks to study is crucial.

Nima is completing a Master’s degree to be followed by a PhD in space resources. Her PhD research, coordinated with the University of Adelaide, will look at mining the surface of the Moon or asteroids, and how space mining policies and procedures will compare with Earth’s mining industry.

“The idea of space and the unknown is exciting; there is so much we understand but so much more to discover,” says Nima. “It humbles us and allows us to see things from a bigger picture and a different perspective. I have always been interested in space, and I like that we have the opportunity to prepare from what we’ve learned terrestrially, to grow and create something great, outside of Earth. It is a game changer.”

A strong advocate for women in STEM, Nima has won multiple awards, including the Minerals Council of Australia’s Exceptional Young Woman in Australian Resources Award in 2018. Nima says the resources industry is evolving technologically and culturally, making it an exciting place to be – and not just because of the potential to literally launch your career out of this world.

Ever wondered what it would be like to tow a prototype space robot into the icy wilderness of Alaska? It’s just one of the job highlights for Australian engineer Will Reid, who works for NASA’s Jet Propulsion Laboratory (JPL), writing the code that lets robots roll over challenging terrain.

“My role is a robotic mobility engineer, and I write software and algorithms to enable robots to make decisions by themselves and traverse these really rough, gnarly terrains, and get from point A to point B,” says Will.

Helen is a senior instrument scientist at the Australian Centre for Neutron Scattering (ACNS) at ANSTO, where she works with a piece of equipment called WOMBAT.

Most of Helen’s job involves helping other scientists – from biologists and chemists to engineers – use WOMBAT to experiment with different materials, subjecting them to extreme conditions like pressure, temperature or a vacuum, and revealing what happens to the material as a result. But Helen also uses WOMBAT for her own research, which is all about icy planets and moons.

For example, on Titan (the largest of Saturn’s 82 moons) there are dunes, volcanoes and oceans, but they’re not made of the same materials as on Earth. Helen uses instruments like WOMBAT to recreate the conditions on moons like Titan to try and find out how these geological features are formed.

“The big question that drives me is: how do all these materials, which are nothing like rocks, act a bit like rocks?” she says. 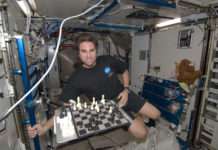 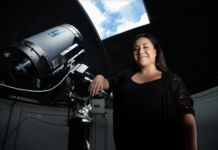 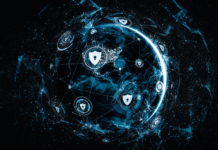 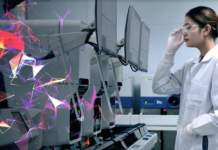 Kickstart your career in science and space 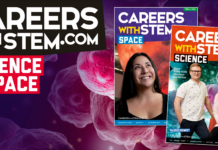