Adam Spencer is on a mission to make maths magical for everyone. The presenter, comedian, author and all-round maths geek believes that maths is essential to our understanding of the world around us.

“The essence of being human is to look at the world around us and wonder: What is going on here?” explains Adam. “Of all the tools we have at our disposal to measure, understand and predict the world, maths is far and away one of the best.”

Maths has always been Adam’s passion

Adam loved maths so much as a kid that he remembers asking his teacher why his class had to stop at learning their 12 times tables – he was pretty keen to go on to 13, 14 and 15! At uni, he originally enrolled in Arts/Law, but the pull of maths proved too strong and he switched majors. Adam went on to graduate with First Class Honours in Pure Mathematics.

His career as a comedian and presenter began in 1996, when he won Triple J’s national stand-up comedy competition. “The standard was appalling in its first year – so I went really well”, jokes Adam. Within a couple of year, Adam was hosting Triple J’s breakfast show with his good mate, fellow comedian Wil Anderson.

A career in death-defying demonstrations

Adam has since hosted numerous radio and TV shows, including science programs such as Quantum and Sleek Geeks, with fellow science aficionado Dr Karl Kruszelnicki. One of the most memorable episodes involved Adam laying on a bed of nails and having a concrete block broken on top of him with a sledgehammer: “It’s something you don’t forget in a hurry!”

Following the success of his previous bestseller The Big Book of Numbers, Adam Spencer has just released his latest book, The Number Games, which is full of trivia, games and puzzles about Adam’s favourite topic. The fun read will boost your knowledge of all things mathematical and give your brain a great workout. It’s no secret that Adam loves a good maths puzzle and his latest volume contains “some real toughies”.

“I particularly love a puzzle where the strategy to solve it isn’t immediately obvious. It’s so much fun to eventually bust a solution”, says Adam. Like all of Adam’s books, it’s for readers of all ages, whether you love maths or are just hoping to enjoy it more.

“Mathematicians will build this century”, enthuses Adam. “Computer coding, big data analysis, artificial intelligence; the list goes on and on. If you want to be one of the architects of our future, do maths.”

Can you solve the puzzle? 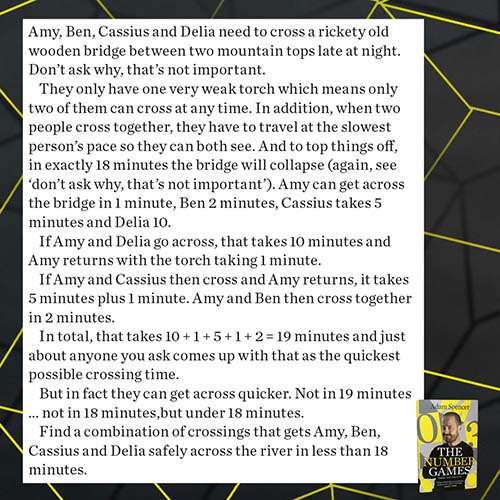 “Of all the tools we have at our disposal to measure, understand and predict the world, maths is far and away one of the best.”