“Music is one of the shapers of every culture on Earth, and it always has been.” says Billy Ó Foghlú. He’s researching a PhD in archaeology with the College of Asia and the Pacific at ANU, focusing on Irish Iron Age instruments.

The instruments themselves have something of a bad reputation in modern ideology. Western music is ruled by the 12-note octave, where the Irish Iron Age instruments used only three separate notes. The horns were long-thought to be used merely for hunting or identification over long distances, rather than music.

It was also easy for early archaeologists to make the assumption that these instruments were primitive. That assumption led to a belief that these Iron Age Irishmen were as simple as their instruments. Billy’s work tries to strip away the idea that Western music is a standard way of interpreting music, and view the objects in isolation. 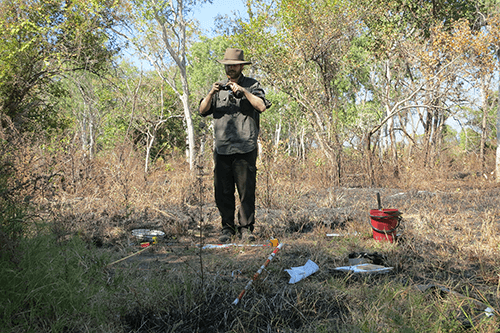 Above: Billy excavating on site.

“Interpreting Irish Iron Age horns in this light causes everything to change, in reality they are complex, and so too is the music they produced, and so too were the people who played upon them.” he says.

“It’s like listening to a new language, it becomes clear that it is equally complex, important and beautiful.”

When it comes to the type of person you need to be in this line of work, Billy says ‘humility’ springs to mind. “You need to be ok with being wrong, I’m wrong at least five times a day,” he laughs.

“It’ important to be interested in everything.” he stresses. Shipwrecks and holy grails aren’t all the profession has to offer. Billy says that often, a hole in the ground can tell you as much about the past, as long as you’re careful and considered in your approach.

On occasion, that hole in the ground may surprise you. Billy recalls a startling discovery at an ancient excavation site; “We were many metres down in the ground, and all of a sudden, a stone beneath us fell away and looking into that hole brought the view of a cellar that had been untouched for centuries.”

The craziest part? The seasoned archaeologists on site took the discovery in their stride, like it was all in a day’s work.

If you’re interested in archaeology, the field offers diverse options for every budding explorer.

“You may be more suited to lab work, or excavating, or you may have a talent for working underwater, or in a desert, or in a highly built up urban environment. Every one one of these is equally important; if you think there isn’t an option available for you in archaeology, you just haven’t found it yet.”

“If you think there isn’t an option available for you in archaeology, you just haven’t found it yet.”