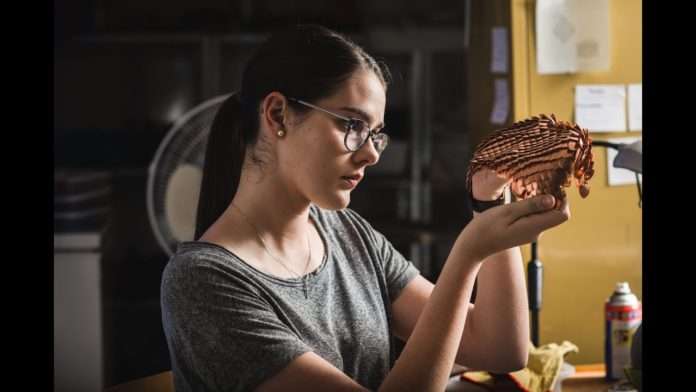 Macinley Butson is no stranger to competing in the BHP Foundation Science and Engineering Awards. She’s been a finalist six times over the course of her schooling, and scored the top prize in both the Investigations and Innovator to Market categories in the 2019 BHP finals.

But that’s not her only achievement to date. Macinley also won the competition in 2016, placed first in the Intel International Science and Engineering Fair in 2017, and has notable accomplishments like NSW Young Australian of the Year 2018 and a feature in Sportsgirl’s Be That Girl campaign under her belt. And she’s only 18.

Macinley entered two projects into the awards this year; A SMART system of two devices working together to reduce excess dosage of radiotherapy delivered to the body during cancer treatment, and the SODIS (short for solar disinfection) sticker, which measures the levels of UV used in this popular water sanitisation process to determine whether the end result is biologically safe for drinking.

“The SMART System is a project which I began exploring when I was in year 10,” says Macinley.

“My father works in the field and has described what cancer patients had to go through. I decided it wasn’t fair they would be subject to side-effect radiation which can cause skin burning as well as the chance of another cancer forming, so I decided to dedicate my time to finding a solution.”

Even though Macinley’s project is a milestone in research around cancer treatment, she’s determined not to give up there.

“I would love to be able to invent a cure for cancer, it affects so many people. Whether you yourself have battled with cancer or know someone who has, it touches everyone’s lives. My invention has aimed to aid the treatment of cancer but I would love to see the day where it is no longer needed because we have found a cure.”

Macinley’s first ever project when she was really young was decidedly less ‘big picture’ than her latest ventures. She chose to create a pair of sunglasses with adjustable lenses – sort of like turning up or down the brightness on your smartphone screen.

“I thought they were so cool,” says Macinley. “But looking back they aren’t very fashionable or practical!”

She still counts the experience as a useful learning curve which helped her to establish some of the skills that she continues to build upon and use today. That’s some of Macinley’s best advice too; regardless of your age or your skill level, just getting started and being proactive is one of the best things you can do to improve your skills.

“It’s great to get involved early, always encourage curiosity and foster a love for STEM from a young age. But remember, it’s never too late to start developing skills! Doing a science/engineering experiment in your spare time can be a fantastic way to delve deeper into something you are interested in, too. Look for something in society which you are passionate about, it can be something simple or you can try to tackle the world’s biggest problems, then dream up a solution and carry it through.”

Looking to the future, Macinley’s heading off to study double degree of Science/Arts this year at uni. She’s not quite sure where it’ll take her, but she’s curious to see where opportunity might lead.

“My favourite quote was written by Albert Einstein: “I have no special talent. I am only passionately curious.” Curiosity is the foundation of science, so just follow this natural curiosity and with a little perseverance you could do something amazing!”

“My invention has aimed to aid the treatment of cancer but I would love to see the day where it is no longer needed because we have found a cure.”