Oliver Nicholls was in year 9 when he first became a finalist in the BHP Billiton Foundation Science & Engineering Awards. To get to BHP, you have to place in the Young Scientist awards – a feat Oliver has achieved 3 times by the age of 18.

For this year’s BHP competition, Oliver created a window-washing robot that aims to reduce injury and risk in the profession. The invention scored him first place in the Engineering category at the awards, and also won him a $75,000 prize at the prestigious Intel International Science and Engineering Fair.

This winning design is not Oliver’s first foray into robotics. He frequents the competitive robotics scene – namely the FIRST Robotics competition that has over 3,600 teams of over 90,000 students competing globally.

“These robots are over 50 kilograms,” says Oliver. “They run a sports-style game where you have 6 weeks to design and build these robots from scratch.” Not your average after-school activity.

When it came to his Design and Tech major project, Oliver decided to use his skills in robotics for improving OH&S safety rather than head-to-head combat. The inspiration? A window-cleaning employee working at his school fell from a height and broke his leg. “I thought, that’s definitely an issue, how can we improve that?” he says. 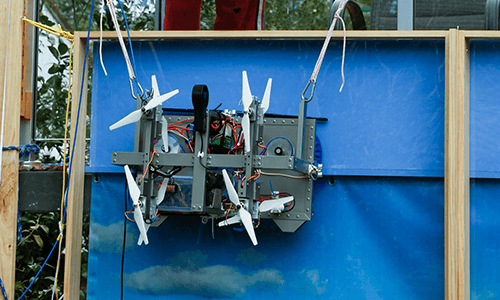 Above: Oliver’s OH&S-improving robot at work.

As a part of the project, Oliver had to consider all the ethical implications of robotic workers. One critic accused him of ‘stealing jobs’ in creating his robot.

“I believe it opens up opportunities. If you’re not physically able to clean windows, you could be a supervisor for the robot doing it. It’s creating opportunities to make it more accessible to people in other areas.”

Oliver is enrolled in UNSW’s Engineering degree and is set to major in mechatronics now that he’s completed high school. His future career path is a little less set-in-stone.

“At this point I’m really open, I don’t have a narrow idea of what I want to be. I want to help people by designing and creating things and engineering solutions.”

“I want to help people by designing and creating things and engineering solutions.”