Luca Stamatescu joined Telstra’s Graduate Program over a year ago, after completing a Bachelor of Engineering (Honours) degree in Chemical Engineering at Monash uni.

Luca loves his current role in the Telstra Labs Technology team, which is his third rotation so far.

“My job involves a lot of rapid prototyping and developing proof-of-concept technologies in artificial intelligence (AI), machine learning and humanoid robotics,” he says.

“We work closely with the Innovation team, looking at customer challenges, and coming up with ideas of how we can build out solutions,” he says.

“Our job is to bring that idea to life with technology, and then assess whether it makes sense, is it viable – and how can we turn that into a product offering?” 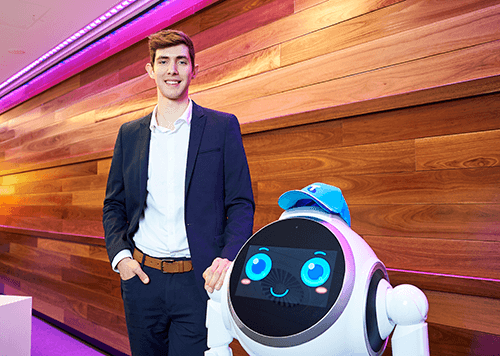 The team develops AI solutions across multiple channels and on different platforms. Luca is currently working on UBTECH’s Cruzr model: humanoid robots that can assist Telstra’s staff, including chatting and interacting with customers.

“They have speech recognition, facial recognition, way-finding and so on; we work on the software side, putting the building blocks together to add value.”

Luca is continually learning new things – like the mixed reality solution for a finance client he developed recently.

“I learnt how to write programs in Unity. I built a virtual reality app to run on a smartphone, which simulated a piggy bank that would become transparent and display the amounts linked to your bank accounts.”

“I learnt a lot about the business side, working with accounting and technical consultants on a multimillion dollar financial analysis project,” he says.

He then moved to a team working with Big Data and natural language processing.

“A lot of the things I learnt in chemical and process engineering involved working with data, how you can model it and how you can then predict future events – which is very similar to the basis of machine learning and AI.”

Luca also praises the program’s flexibility. “I’m very passionate about tech and had a clear direction of where I wanted to go for my next rotations and for the most part, you can drive your own career and follow your interests.”

Luca says that engineering graduates often expect they will rely on specific technical knowledge from their degree – but that can be limiting.

“There’s so many exciting things you can do with the skills you have,” he says. “I did briefly work in a refinery where the technical information and thermodynamics equations were useful,” he says. “But now I apply the same logic and mentality to resolve a financial problem or to work with big data, as I did on a heat exchange in a refinery.”

This article is brought to you in partnership with Telstra.

“I learnt how to write programs in unity and built a virtual reality app.”

Which movie robot are you?