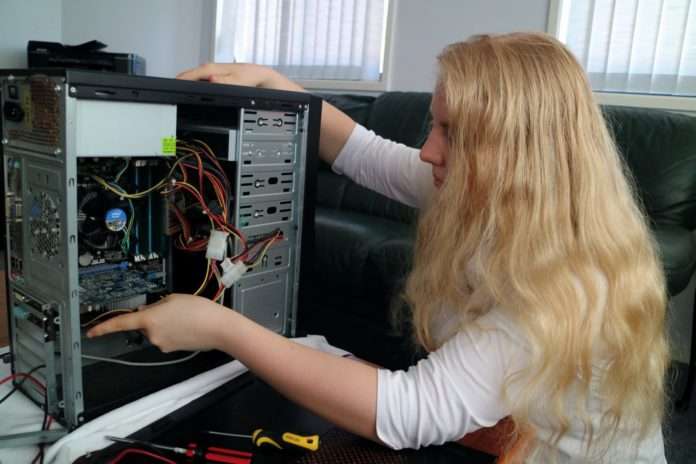 Eliza Greenwood grew up tinkering with computers, but it wasn’t until late in high school that she realised she could turn her hobby into a career.

Growing up, Eliza’s dad – who also works in IT – taught her how to use operating systems like Linux and Windows, and as a teenager, she would build Minecraft servers with her friends. Then, in Year 11, Eliza completed a Certificate III in IT as part of her HSC. The work experience she completed as part of the Certificate opened her eyes to career possibilities she hadn’t ever thought about before.

RELATED: Do I have to go to university to get a career in STEM?

“That’s when it clicked and I thought, I want a career  in this,” she says. During work experience at a local IT company, Eliza did a range of tasks such as installing operating systems, troubleshooting and general maintenance. “It was basic IT stuff, but it was interesting.”

Towards the end of the HSC Eliza started thinking about studying the Certificate IV in IT to build on what she had already learned. Then she found out about the Microsoft Traineeship Program, which pairs aspiring IT professionals with Microsoft partner businesses for on-the-job training while earning a Certificate IV. “I didn’t think I’d actually get it, but you never know if you don’t try,” says Eliza.

The program is highly competitive, with 4000 applicants competing for just over 80 traineeships at 40 companies. Eliza went through a series of interviews before ending with an in-person interview with her host employer, MOQdigital. She made the cut and started working with MOQ’s Managed Services team on the support desk in February last year while spending one day a week studying at TAFE.

As an outgoing person, the thing Eliza loves most about her job is the customer contact. “Not only do you get to solve problems, but you also get to build a relationship with the customers,” she says. “It’s not just about fixing their computers.”

In between taking helpdesk calls, Eliza has also completed 12 extra certifications through Microsoft and CISCO – another perk of the job. Once her traineeship is complete she is thinking about going back to full-time study to complete a Diploma or Advanced Diploma and specialising in networking.

One thing is for sure – taking a chance has paid off. “I’m glad I took the opportunity. There’s a lot of learning  in work experience.”

This article is brought to you in partnership with Training NSW

“Not only do you get to solve problems, you get to build a relationship with the customers.”