One of the coolest things about working in science is that there’s always more to discover.

Just ask the team of CSIRO scientists who have just discovered the world’s first true millipede with more than 1000 legs!

It’s been named Eumillipes persephone and it has a whopping 1306 legs! Prior to this discovery, no millipede had been found with more than 750 legs.

CSIRO Research Scientist Dr Juanita Rodriguez was one of seven scientists involved in the discovery of the leggiest animal on the planet and says, “We’ve been naming millipedes for centuries, but this discovery is particularly exciting because it’s a millipede in the truest sense of the word.”

The millipede’s name derives from the Greek word eu- (true), the Latin words mille (thousand) and pes (foot), and references the Greek goddess of the underworld, Persephone.

So where did they find this creature? Well, they actually found four of them 60 metres underground in southern Western Australia. As for its other features, it has a long, thread-like body made up to 330 segments, and is up to 0.95mm wide and 95.7mm long. It has no eyes, short legs and a cone-shaped with antennae and a beak! 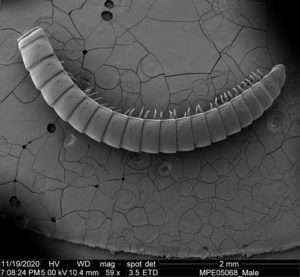 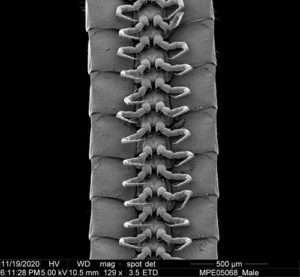 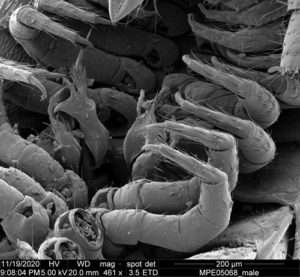 And what happens after you discover the world’s first true millipede? Data analysis, of course! Dr Rodriguez has performed the data analysis from the genome of the millipede to determine what other species the Eumillipes persephone was related to.

This work also ties into a broader study being conducted by Dr Rodriguez and her team at CSIRO’s Australian National Insect Collection in Canberra.

“We are studying the chemicals that millipedes produce to look for interesting molecules that could be used as potential antimicrobials against highly virulent and antibiotic resistant pathogens,” Dr Rodriguez said.

“This is important because many of these pathogens are resistant to current drugs, and we need new molecules to treat infections like golden staph and pneumonia.”

Ahh, how amazing is science?!

Wanna be a scientist?

Imagine discovering new species for a living! If you’re keen on a career in science, start by taking the following quiz to suss out what area you should go into, then watch our science careers video to find a job that would be perfect for you.

Then watch the video

For more science stories, head to our Careers with Science section or check out all the incredible science role models we’ve profiled so you can learn from their study and career paths.