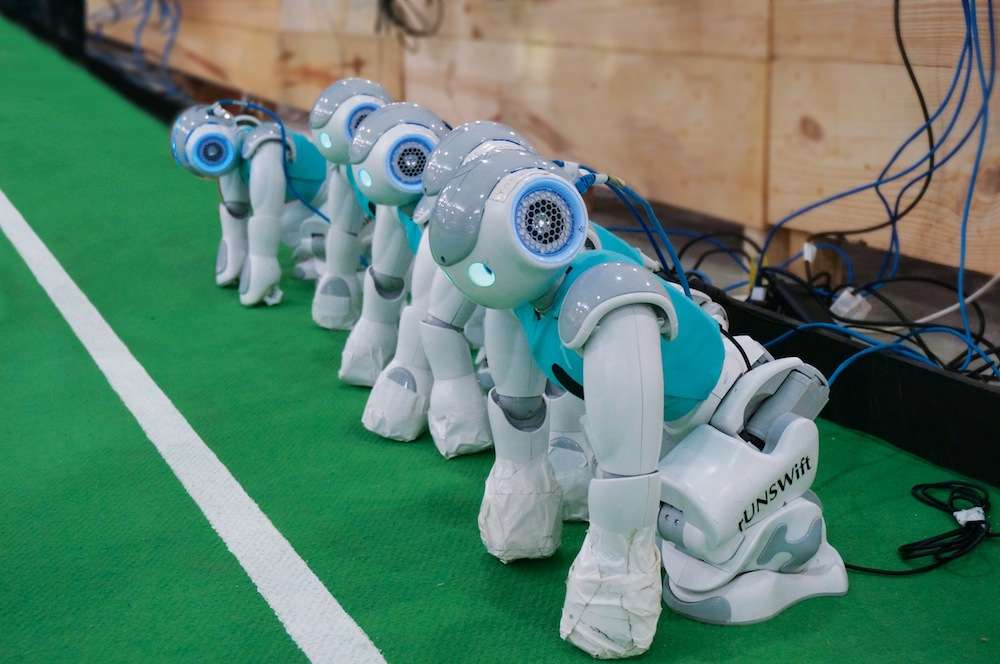 Students at UNSW Australia develop their CS skills through team research projects that include kicking a few awesome programming goals.

You mightn’t have heard, however, because the players are all half a metre tall, made of plastic and, though they can field a ball and know their field positions, are not human.

Every year, teams of autonomous robots from all over the world compete as the stars of RoboCup Soccer.

A team of computer science and engineering students from UNSW Australia in Sydney took out the 2014 Standard Platform League competition, programming their team of robots to a 5-1 victory over a German university.

But RoboCup, which promotes robotics and artificial intelligence research, is not just about sports.

RoboCup Rescue, for example, is a project that researches the use of robots in disaster areas in order to speed up rescues and reduce the amount of time rescuers are exposed to dangerous conditions.

Maurice Pagnucco heads up Computer Science and Engineering (CSE) at UNSW and says the university provides students with extensive opportunities to pursue projects they are passionate about.

For example, student Mrinal Chakravarthy is working with the Redback Racing Team to build a data acquisition system for a Formula One-style car. It will be capable of reading several sensors at once, processing the data while the car is moving and displaying the information to the driver, as well as storing it for later analysis.

“The operations within the system need to occur at a microsecond level,” Mrinal explains.

The team is also developing a data-logger – an electronic device that records data quickly, reliably and, also, cheaply. CSE at UNSW assists the endeavours of students like Mrinal by making facilities and funding available.

“CSE provides rent-free and low-rent space for up to a year for students and recent grads to create their own startups,” Mrinal says.

Successful startups using the space so far include Mijura, which helps teams collaborate and manage tasks, and Foodbank Local, which matches food donors with welfare agencies who distribute food to people in need.

There is also DevSpace – fitted out with a 3D printer, microprocessors, a virtual reality headset and other equipment – for students to build hardware and software projects.

“We provide facilities and access to equipment to allow students to develop their own ideas and build their own gadgets in an innovative space,” Maurice says.

UNSW Australia’s CompClub runs programming and computing workshops for high school students. The main aim of the club is to get younger generations interested in computing. “We teach them coding and show them how easy it is,” explains CS student Vincent Wong. “It’s great because they can meet students from other schools who have a similar interest in computing.” This year, the CompClub started running coding and robotics workshops in schools, and is working on an online portal for teachers to expand their skills.